Here it is guys! The Blogging with Tom exclusive interview with bestselling author WM Paul Young. Some fascinating answers to read through – thanks to those who sent the questions in. Hopefully they have been answered below;

1.  The shack has been a best seller with over 18 million copies sold. That’s incredible and I know that there has been some amazing responses. Do share some stories of how God has impacted peo 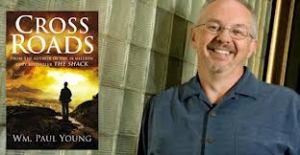 ple through ‘The Shack?’

Over 18 million sold, so the estimate is that 100 million have read the book.  I have received over 100,000 emails, letters and messages from all over the world, people telling me their stories of heart’s healing, relational reconciliation and how this little book has impacted the faith journeys of so many.  The first fifteen copies I printed at the local print store for my family and friends did everything I ever wanted this story to do.  If you would like to see a few, you can visit www.windrumors.com or wmpaulyoung.com.

2.  The shack takes an unusual perspective of the trinity – How do you respond to those who disagree or struggle with this?

The beautiful reality of imagery is that it employs word pictures and as we all know, a good picture is worth…  Even in the Hebrew Scriptures and the New Testament, imagery is rampant and provocative.  God is father, but also wind and breath, but also a mother hen who covers and protects her own, is an eagle who rescues, a rock that is solid, a fortress that shields, a woman who loses a coin, a man who finds an abandoned baby girl and falls in love with her (Ezekiel, in case you were wondering).  Idolatry is when one fastens upon a single image as a definition of God, and begins to assemble one’s life around that single facet.  Imagery was never intended to define God, but like facets of a precious stone, each reflects the light of God’s character and the wonder of God’s nature in a way that we can perceive and sense and know. As a word-painter then, I am given freedom to express this magnificence in creative ways.  God is not male or female, but all maleness and all femaleness is derived from the Beautiful One, who is a community of other-centered, self-giving love.  So part of the art is to craft metaphors and imagery that satisfies the heart, incompletely but partially, and bends the framework of our paradigms to allow for more space, more light, more love, more anger at all that damages and hurts, more beauty, more grace.  The incarnation means that God fully joined our humanity.  Jesus is the ultimate bridge birthed in bone and blood.  I can touch and understand this man.  God has found a son-language that I can comprehend.  Can the Holy Spirit not come to me in a way that I can grasp, inside the wonder of a child or the honor of an elder.  I think the landscape is open as we participate with the One who is the source and ground of all that is creative.

3.  In the shack where did you get the idea for Sophia (the judge) from? What is the meaning behind this encounter?

Proverbs 8, in the Hebrew Scriptures, where Wisdom (in Greek = sophia), is personified as a woman who is trying to get our attention in the streets of our lives and relationships.  So many of our negative attributions for the character and nature of God are inside of caricatures of judgment and condemnation, so I wanted to turn the tables on us as human beings.  I wanted to place us in the position of judgment, one that we readily and regularly assume.  Our ability to justify ourselves astounds me.  I wanted Mackenzie to face the wisdom of God, which is beautiful when encountered, but has a way of unmasking our best attempts at self centered independence.

4.  Someone asked me whether it’s possible to know Jesus like Mack did? Your thoughts…

You might think that you want to know Jesus in the same way, but it is not true.  What you want is for you to know God, not through Mack’s persona or experience or anyone else.  You matter.  Your journey, personality, heart and soul and mind are unique and magnificent and the knowing of God is going to be an adventure unique to you.  There will always be some commonalities (we believe many of the same lies, for example) and the character and person of God, especially in the face of Jesus, will always be a constant (whether we know it or not), but just as you cannot compare your pain with anyone else, neither can you compare your process of transformation or relationship with God with anyone else.  If God had wanted you to be someone else, God would have made you someone else.

5.  You have a new book coming out titled ‘Cross Roads‘ – Tell us a bit about the book and what to expect?

I have lived long enough to be around and near the events of death and dying. I have been intrigued by NDE (near death experiences), and stories of people who have exited comatose states to report awareness and experiences that suggest significant events can occur inside that ‘thin place’.  How does one explain the continuation of mindful activity even when the biological brain has ceased activity?  How does one comprehend a conversation between Jesus and Moses and Elijah on the Mount of Transfiguration?  In The Shack, we struggle with Mackenzie who is stuck in the midst of his life. What would happen if we catch a man in-between, in this place between this earthly existence and the other? What if this man is not a likable person, fraught with the frailties so common to many of us, selfish, egotistical, willing to sacrifice relationship for control and success? How do we reach this man?  Those sorts of questions along with the metaphor of a cross roads, a place of intersection where one has to stop and choose a direction, face others and witness the consequence of actions, combined to give me an imagination for the storyline.  When I began working on it, I wasn’t sure it was possible, that it could work.  I am thrilled with the results and I think readers will be also.

6.  What inspires these fascinating, deep and inspiring stories? Where do they come from?

The Shack is deeply autobiographical.  I tell people it is a true story, but not real.  Parables would fit into this category, being true but not real.  Creative fiction has the inherent kindness that allows us to rephrase our experience so that it can be entered into easily by others.  Cross Roads is not as deeply personal, but it is much more communal.  This means that the process of transformation happens inside of relationships and the tensions and delights, and loss of control, that relationships offer.  Where do any stories come from?  Part our own damage, wonder, questions, joys, pains, brokenness, redemptions, adventure and process.  But it happens inside of relationship, with God and with each other.

7.  What do you hope people will get out of reading this new novel?

I am not an agenda driven writer.  I am more an exploratory writer who is investigating questions that matter to me and hopefully to those I care about, my family and friend predominantly.  I would rather create space, or push out the walls of existing space and make room for others to hear within that landscape whatever it is that God might want to communicate to them personally and communally.  Having said that, there are certainly themes in what I write, such as the value of each individual person, of a God who is good all the time regardless of our perception of the character and nature of that God, and that God is involved inside the details of our lives with great respect and affection independent of our ability to perform to religious creed or requirement.  Selfishly, I suppose, I would love a reader to put down the book when finished and with a sense of the glee of a child exclaim, ‘Wow, let’s do that again!”

8.  If there is a key message that you want to communicate through all of your writing and if so what is it?

I think  this is answered above in the last question…at least, I think it is.  I could be wrong, which would not surprise me, or my wife and kids.  🙂

‘CROSS ROADS’ is released TODAY (22nd November) and is available from Amazon.

Tom Elliott is a Christian Communicator who is passionate about introducing people to Jesus. Tom is also a credible and experienced Comedian, Magician, Speaker and writer, with a heart to use his gifts for the extension of Gods Kingdom. He has travelled extensively throughout the UK and abroad, whilst also being on the leadership team of his home church in Gloucestershire. Tom has been mentored by some of the UK’s most influential evangelists including J.John, Steve Legg, Mark Greenwood, Mark Ritchie, Matt Summerfield, Barry Woodward and more. Through his acclaimed show, Tom captures the attention of non believers through quality entertainment and as a result has been able to share his faith on TV, Radio, Online, in schools, churches & theatres reaching thousands of people with the Gospel. Tom has also taken his work to many large scale events and Festivals such as ‘New Wine’, ‘Detling,’ ‘Gorsley’, ‘Greenbelt’ and ‘Spring Harvest’ Tom is honoured to be an Ambassador for the international Christian charity ‘Compassion’ who work to change lives in over 26 countries that suffer extreme poverty. Toms desire is to see all people take hold of Jesus’ promise of life to the full. On stage and off stage, Tom’s passion for this fulfilment of life is contagious. Tom has been personally trained by expert entertainers and in 2013, Tom contributed to a book titled ‘Does God LOL’ alongside some of the biggest names in comedy, to raise money for national charity, ‘Mary’s Meals’. This book is now available in many good book stores. www.laughingwithtom.co.uk
View all posts by laughingwithtom →
This entry was posted in Uncategorized and tagged abuse, blog special, books, christian, christian faith, christianity, Church, cross roads, exclusive, father, God, hodder faith, hurt, interview, Jesus, joy, love, pain, the shack, wm paul young. Bookmark the permalink.