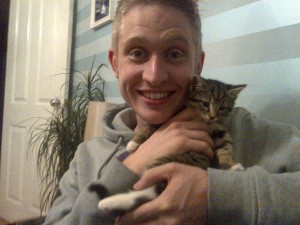 8 weeks old and very talkative, Jeffrey is the first addition to our family.
I never thought that getting a kitten would be so dramatic and result in so many jobs. Just this morning, I have been up since 5am because I woke the cat on my way to the kitchen for a drink.

The other day we arrived home late at night to discover that he’d left us a present. A personal present that had been carefully placed in the centre of the 2 bed pillows, just on the tip of the duvet.

Without going into too much detail, this was a soft and moist kind of poo which made it unpleasant to clean up.

It gets worse though, I was called by my wife to the bathroom yesterday, to discover that Jeffrey had excreted in his litter tray (good boy!) but had left the litter tray a little early and therefore was dragging the remains around with him.

So yes, that’s right, I had to wipe my cats bottom!

I mean, I was expecting that getting a kitten would just involve the basics.
1) Feed it   2) Let it sleep, and 3) throw around mice   (fake that is, real mice is a bit harsh)

So often we don’t like the thought of making an effort? We expect it all to be simple and easy.

God requires us to make an effort in approaching him. He hasn’t made us like robots who on his command will worship him, instead, he has given us a choice and left it to us.

One of my favourite bible passages says; ‘In him (Jesus) and through faith in him (Jesus) we may approach God with freedom and confidence.’ (Ephesians 3:12)

When Jesus died on the cross so that our wrong doing could be erased and ignored, he made a way for us to approach God with freedom and confidence and so today, my question is; Why are you holding back?

If you believe that God exists, if you know that he is interested in doing life with you, then make the effort.  Ask God to come into your life and then chat to a Christian that you are in contact with.

Don’t just expect the basics, make an effort to do what’s necessary.

If you have enjoyed reading this post – I’d be really grateful if you would help get this message further by sharing it on your Facebook / twitter profile. Cheers.

Do comment below too if you have any thoughts!

Tom Elliott is a Christian Communicator who is passionate about introducing people to Jesus. Tom is also a credible and experienced Comedian, Magician, Speaker and writer, with a heart to use his gifts for the extension of Gods Kingdom. He has travelled extensively throughout the UK and abroad, whilst also being on the leadership team of his home church in Gloucestershire. Tom has been mentored by some of the UK’s most influential evangelists including J.John, Steve Legg, Mark Greenwood, Mark Ritchie, Matt Summerfield, Barry Woodward and more. Through his acclaimed show, Tom captures the attention of non believers through quality entertainment and as a result has been able to share his faith on TV, Radio, Online, in schools, churches & theatres reaching thousands of people with the Gospel. Tom has also taken his work to many large scale events and Festivals such as ‘New Wine’, ‘Detling,’ ‘Gorsley’, ‘Greenbelt’ and ‘Spring Harvest’ Tom is honoured to be an Ambassador for the international Christian charity ‘Compassion’ who work to change lives in over 26 countries that suffer extreme poverty. Toms desire is to see all people take hold of Jesus’ promise of life to the full. On stage and off stage, Tom’s passion for this fulfilment of life is contagious. Tom has been personally trained by expert entertainers and in 2013, Tom contributed to a book titled ‘Does God LOL’ alongside some of the biggest names in comedy, to raise money for national charity, ‘Mary’s Meals’. This book is now available in many good book stores. www.laughingwithtom.co.uk
View all posts by laughingwithtom →
This entry was posted in Uncategorized and tagged cat, cats, evangelism, evangelist, God, Jesus, kitten, laughing with tom, Life, magician, making the effort, opportunity, poo, present, tom elliott. Bookmark the permalink.